Worldometer was chosen as content provider for the U2 360˚ Tour 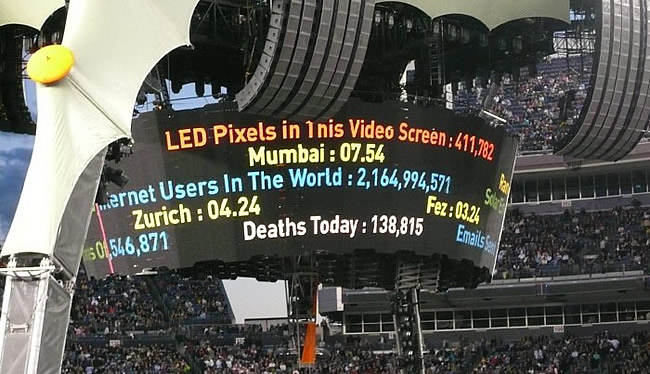 Above, our real time counters displayed on the giant 360˚ video screen of the U2 360˚ concert stage (other photos here and here), setting the tone of the U2 show’s existential question: What Time Is It In The World?

Following is an extract of the comments from the U2 Team Conent on the genesis of the idea and the partnership with Worldometer:

"The idea is that once the opening band has finished, random clocks from various time zones around the world begin to scroll around the giant 360 video screen. After a while, coming in the opposite direction, a whole range of diverse facts and figures begin to appear, concerning humanity, life, the planet, the 360 tour, the local area… all manner of random trivia. The clever bit, however, is that many of the figures are counting as they glide around the screen, giving running totals of everything from car sales to world population. If this sounds complicated, that’s because it is. We are working with the people who put together the site ‘Worldometers.info’ who have helped us figure out how to use some of their information feeds. To this we have added a stream of information for each city, state and stadium that we will visit, plus some fun facts about the tour and crew and some totally random, curious pieces of data. One of the interesting parts of this is that the figures are by definition accumulative. The running figure of ‘World Population’ will be larger at each venue, whilst the daily statistics like ‘Cigarettes Smoked Today’ will more or less repeat from city to city, given a small variance for different on-stage times.

You will by now have realised that, as well as being massively complicated, this means making a different video piece for every show. To cover ourselves against delays and breakdowns, each sequence needs to be able to run for over an hour, making Luke responsible for a mere 32 hours of screen time between now and the end of the tour. In theory, once the facts are gathered, the layout is designed and programmed, and all the code is written, the day-to-day changes should be relatively straightforward but today we feel like we are a long way from that moment. Even something as comparatively simple as making the clocks keep time can become enormously difficult where multiple-playback and video screens are concerned, but let’s face it, we love a challenge.

My hope is that this piece will provide a mood or a tone that will set the scene for the 360 show. I like the idea of the information ranging from the banal to the controversial but presenting it all in an entirely neutral way. We’ve been here before, as this was the underlying ethos of ZOOTV – everything is out there, everything is coming at you and the sense you make of it is mostly dependent on your own perception and what you bring to it." 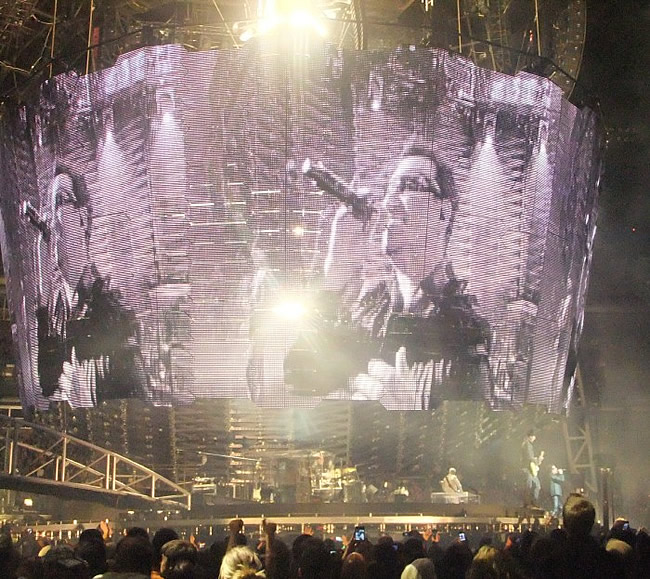